Crack! A heel landed on top of my head as my opponent stood about half a foot in front of me.

How the hell did he get his leg up that quickly and that high to reach the top of my head? He was shorter than me!?  Over the years of sparring with my Tae Kwon Do master, every single time I would get too close to him he would snap his leg up quicker than I could react and axe kick me with his heel square on the top of my head. He’s the only person I had ever sparred that could do that. Even at a young age I was able to compete against and beat mostly all of the older students. But not him. Him and his 7th degree black belt had my number.

A few years later it was 6 AM and I was getting the bridge of my nose ripped off by a forearm that felt like it wasn’t made of bone but of metal instead. He refused to allow me to take him down on the wrestling mat. Once he was done kicking my ass, the next guy in our small “breakfast club” group was up for his fair share of stiff arms, sprawls, front head locks and take downs. All on the receiving end.

This went on for years until my junior year when I finally got one. I got a take down! I beat my coach in a scramble and took him down. I won a small but monumental battle during the war. The moment was brief as he proceeded to make me pay a high cost for my success. But over time I took coach down 2 more times before I graduated. He had been wrestling since he was a child, his father was a coach, he had placed multiple times in the deeply talented state of Michigan in high school wrestling and was 1 match away from being an all-American in college. I was the only person, to my knowledge, to take him down in high school and with only 3 successful attempts over 4 YEARS. These were some of my proudest moments because of how much I respected him. 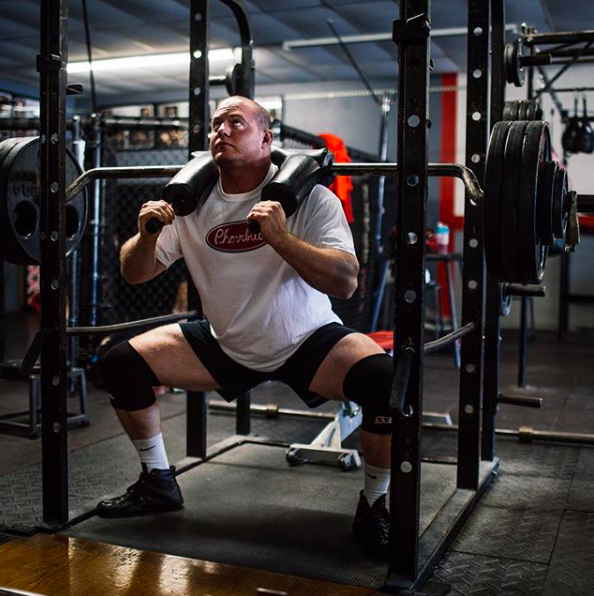 During college I decided to delve head first into powerlifting. Luckily for me, my mentor and high school weight training coach was a strong dude and great coach to boot with a Master’s degree in Exercise Science. I had always remembered spotting his bench presses with insane amounts of 45-pound plates loaded onto the barbell in high school. This was weight I’d barely seen squatted before. I had begun training with him during summers when I was home and using his training programs while I was away attending college. He had benched 585 in his prime and was benching 520+ now during his comeback. He was always benching at least 100 pounds or more than us and he wasn’t afraid to let us know. He talked shit to us daily and we dished it right back to him for being a bench only competitor. It motivated us to work harder to put more weight on the bar, and to train as long as he did. We wanted to learn what he knew and we asked questions along the way. He pointed us in the right directions to learn more on our own.

In 2013 I had a drastic change of direction in my life which had briefly rocked me. But I qualified for the highest caliber RAW powerlifting meet at the time, the Raw Unity Meet 7 (RUM7). I had hit an all-time PR total in the squat, deadlift and total in order to qualify. I made the qualifying total by .1 pounds. I was on cloud 9. Prepping for RUM 7 I didn’t realize my head was so far up my ass that my training sucked. I ignored all of the signs. I was blinded by my ego. I had never regressed in strength at a powerlifting meet before. I had only made progress and hit PR totals every time and I was just rolling off of a big win. Granted a certain level of confidence is needed to lift big weights, but when confidence turns to cockiness there is a problem. The same goes for anything in life. At RUM 7 I embarrassed myself on the biggest platform I had ever competed on against all-time world record holders (not some want to be individual federation world records). My total slid backwards by over 50 pounds and I only hit 1 PR which was on the bench press. I smashed my iPod in the warm up room out of anger and frustration. I physically walked to the bathroom and looked at my reflection in the mirror for a harsh reality check. I lied to myself for months about training and it culminated on the biggest stage to date. I got what I deserved.

All of these life shaping interactions, except for the last example, have involved me checking my ego at the door. I was never afraid to get my ass whipped or to lose in a competition because at the end of the day I knew it would make me better. If I had only sparred with kids my age, how would I have learned not to get too close to an opponent because I could get axe kicked? If I never wrestled my coach who dominated me for the vast the majority of the time, how would I have truly improved my head outside single leg shots so rapidly? How would I have been able to train myself and client for years after I began this journey in strength if I hadn’t been confident enough to be the bottom feeder and be the weaker, less educated, less experienced man in the room?

As author Robert Schuller says “tough times don’t last, tough people do”. You must be tough enough to place yourself in a difficult position and search for struggle. Surround yourself with people that you can either lose to, learn from or compete with every day. Try your hardest to beat them and gradually climb your way up the ladder of proficiency. It won’t be easy and it won’t be without sacrifice. Every time I got cocky or thought I was better than I actually was, these people showed me that I was wrong. If you truly want to be good at whatever you’re doing set your ego aside and pick up a nice flakey piece of humble pie, put your head down and go to work.